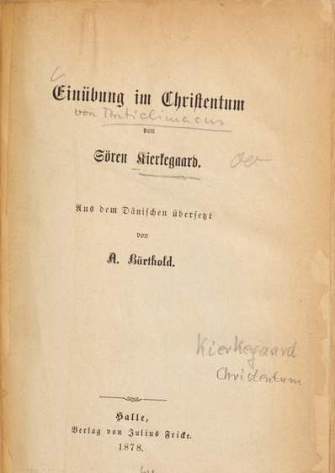 The essay is very interesting. There aren’t any revelations in it for people familiar with the older translations, but there is lots of other interesting information. Lowrie recounts, for example, how he was impressed by “the importance the name of Kierkegaard had acquired throughout the Continent, especially in Germany” immediately following WWI (p. 184). I was aware, of course, that the Germans learned of Kierkegaard’s work even while he was still alive, to say nothing of the period after his death. I’d assumed, however, perhaps partly as a result of Georg Brandes’ attempts in the late 1880s to introduce Kierkegaard to Nietzsche, that Kierkegaard’s work was not actually all that well known among German-speaking intellectuals. That is, I’d assumed that if Kierkegaard had become well known in Germany, that, as an intellectual, Nietzsche, would already have been aware of him. When I learned he wasn’t, I like so many other scholars, assumed that Kierkegaard was a marginal figure in German intellectual history.

I couldn’t have been more wrong. “I could hardly pick up a serious book,” Lowrie continues, “without finding his [i.e., Kierkegaard’s] name in it. Every writer who claimed to be abreast of modern thought had something to say about him, and every reputable publisher had to bring out something. S.K. had already taken the place of Nietzsche as the literary vogue in higher circles” (p. 184).

That was revelation to me. Kierkegaard had displaced Nietzsche in early twentieth-century German thought? Of course the popularity of Kierkegaard in Germany in the post WWI period is compatible with his relative obscurity at the end of the nineteenth century. I’m not the only scholar, however, who believed Kierkegaard was a marginal figure in German intellectual history.

It would have been helpful if Lowrie had included some references to specific works. Unfortunately, he didn’t. Fortunately, we have Heiko Schulz’s excellent essay on Kierkegaard’s early reception in the German-speaking world in Kierkegaard’s International Reception, Tome I: Northern and Western Europe. The essay is entitled “Germany and Austria: A Modest Head Start: The German Reception of Kierkegaard.” Schulz appears to have tracked down every reference to Kierkegaard in the last part of the nineteenth century, to say nothing of the early part of the twentieth century, and includes references to specific article titles as well as helpful summaries of their contents. Most of the early German references to Kierkegaard appeared, predictably, in theological journals.

I’ve always been interested in Kierkegaard’s early reception in Germany because I believe that reception had a strong influence on his reception in the rest of the world. I’ve become more interested in it recently, however, as a result of my interest in George MacDonald. MacDonald’s thought is remarkably similar to Kierkegaard’s. I can find no evidence, however, that MacDonald could read Danish and the earliest English translations of Kierkegaard did not appear until after MacDonald’s death. MacDonald appears to have had an excellent command of German, however, as did most English-speaking intellectuals around the end of the nineteenth and the beginning of the twentieth century, and it seems likely that at least some of his reading would have included German theological journals and possibly even early German translations of Kierkegaard. I haven’t had any time yet to research this. That would require tracking down both what books he personally owned, what books and periodicals would have been available to him in the libraries he used, and going through all his correspondence in search of any mention of Kierkegaard’s name.

That said, MacDonald is himself a profoundly original thinker and if his view of human existence and Christianity is remarkably similar to Kierkegaard’s it is not necessarily because he was influenced by Kierkegaard but very possibly because he and Kierkegaard were similar in other ways, and that they understood easily things that the rest of us have to struggle to understand.