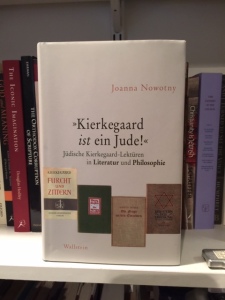 Some months ago I was contacted by a Swiss scholar, Joanna Nowotny, who wished to thank me for the work I do on this blog. She’d made extensive use of it, she explained, when doing the research for her book, »Kierkegaard ist ein Jude!« Jüdische Kierkegaard-Lektüren in Literatur und Philosophie (“Kierkegaard is a Jew!” readings of Kierkegaard in Jewish literature and philosophy) (Wallstein Verlag, 2018). At some point, when I have the time to construct a “Testimonials” page for this blog, I’ll post her lovely email to it. In the meantime, however, I procured a copy of the book and have begun reading it.

I was intrigued, of course, because most of the recent discussions of Kierkegaard and Judaism with which I am familiar have been connected with Peter Tudvad’s groundbreaking Stadier på antisemitismens vej, Søren Kierkegaard og Jøderne (Stages on the way of anti-Semitism, Søren Kierkegaard and the Jews) (Rosinante, 2010) which reveals that Kierkegaard had some truly reprehensible attitudes toward Jews and Judaism, particularly toward the end of his life. That doesn’t mean, however, that Kierkegaard has nothing positive to contribute to the Jewish intellectual tradition. George Connell argues, in fact, in his excellent Kierkegaard and the Paradox of Religious Pluralism (Eerdmans, 2016) that “[i]ronically, in [Kierkegaard’s] final years, just when his rhetoric is most negative about Jews, just when he most offensively asserts the utter opposition of Judaism and Christianity, the substance of his thought represents a reaffirmation of Christianity’s fundamental and positive relation to Judaism” (p. 66).

I’ve only just started Nowotny’s book and I haven’t gotten very far yet, so I will hold off making any substantive comments on it until later, after I have finished it. In the meantime, I have taken the liberty of translating the copy from the back cover of the book. This will give you a little taste of what the book is about.

This large-scale study by Joanna Nowotny examines the traces left by Kierkegaard’s writing and thinking in the theoretical discourse and literary culture of Jewish Modernism.

“Kierkegaard is a Jew!” Gershom Scholem noted enthusiastically in his diary in 1915. “Nowhere” is the “core of Jewish sensibility [Weltgefühl] … so experientially formulated,” as in Kierkegaard, writes Max Brod a few years later in “Heidentum — Christentum — Judentum” (Paganism, Christianity, Judaism) (in Der Jude 1, 16-20). Such interpretations of the “Christian author” Kierkegaard are remarkable. They raise the question of how Kierkegaard’s œuvre, which was enormously popular in German-speaking Europe after 1900, offered possibilities for a Jewish interpretation and appropriation in particular. How is Kierkegaard’s thinking in this context made theologically, politically, and literarily fruitful, by poets and thinkers such as Martin Buber, Franz Rosenzweig and Franz Kafka? Which aspects of his work play a special role? What attitudes [Gestus] underlie the various Kierkegaard appropriations and which functions do they fulfill in the context of discourses on Jewish identity? Joanna Nowotny addresses these questions in her study and shows the traces Kierkegaard’s writing and thinking have left on authors such as Martin Buber, Gershom Scholem, Franz Werfel, and Franz Kafka.